16-year-old girl who allegedly killed her friend's father that attempted to rape her, remanded in custody 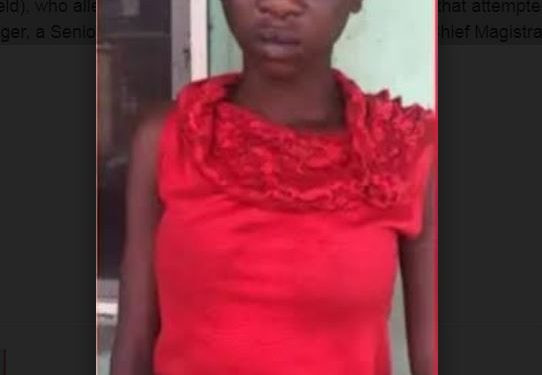 A 16-year-old girl who killed a 51-year-old man that allegedly attempted to rape her, was arraigned before an Ebute Meta Magistrate Court sitting in the Yaba area of Lagos State, Tuesday March 24.

The  Senior Secondary School (SSS) 3 pupil was arraigned on a one-count charge of killing one Babatunde Ishola on March 7, 2020 at Nwadolu Street, Aboru in Alimosho area of the state by stabbing him with a knife.

Chief Magistrate Adedayo did not take the plea of the teenager who she remanded at the Correctional Home For Girls in Idi-Araba.

The police was directed to send a duplicate copy of the case file to the Directorate of Public Prosecutions (DPP) for advice, before adjournment of the case till April 27.

“The body was evacuated to the hospital for post-mortem examination. The suspect was arrested and the knife she used in stabbing the deceased person was recovered.

“In her statement, the suspect said the deceased person, who is her father’s friend, invited her to his house to assist him in fetching water, as he lives alone. She said she has always been helping him with the house chores but that while she was helping out with the water on Saturday, he attempted raping her. Then she picked a knife from the room and stabbed him.

“The suspect was taken to hospital for medical and forensic examination. The Commissioner of Police Lagos State, CP Hakeem Odumosu, has ordered the immediate transfer of the case to the State Criminal Investigation Department Yaba for discreet investigation.”

1360 Comments - Found in "16-year-old girl who allegedly killed her friend's father that attempted to rape her, remanded in custody"

Too bad, where is dis country heading to?

I am really delighted to glance at this weblog posts which carries tons of valuable data, thanks for providing such statistics. P.S. If you have a minute, would love your feedback on my new website re-design. You can find it by searching for "royal cbd" - no sweat if you can't. Keep up the good work!

Hello! I objective would like to give a tremendous thumbs up recompense the great info you curb here on this post. I desire be coming back to your blog quarry of more soon. http://www.surviv-io.fun

I must recommend this girl to be jailed

She is a bitch

1
Interview with the dancing coffin Undertaker who became an online sens...
2
[MUST READ] Reasons You Are Waking Up In The Middle Of The Night
3
‘Searching People’s Phone On the road Is a criminal Offence’ — Kwara C...
4
Music-Suzzkid - Jessica
5
Free beat: Wizkid & Terri Type of Afro Beat By “Mr Lekki”
6
CAUGHT !! Naira Marley impersonated Nigerian Minister in other to trav...
7
[REVEALED] Types Of Hugs Ladies Issue And Their Interpretations
8
Wanna Know Advantages Of Starting Small As An Entrepreneur??? Check He...
9
Corona Virus: Popular Nigerian Actress Tonto Dike Help Poor Nigerians...
10
[MUST READ] 5 Things You Should NEVER Put in the Washing Machine